There is nothing I enjoy more than writing a good villain.  I think I am on my way to creating that character and his Enforcer.   The  Enforcer appears to be more ruthless than the Protagonist.
I finished the first act of my second episode, which ends with Drake’s nemesis threatening a Senator from the state of Michigan.  The mysterious man we call Shadow, or some people call him the Man in the Shadows.  After I finished the act, I was happy with it and I knew I was going to be writing this post.  Shadow is far too interesting, not to talk about.
Shadow is a character, I created after I ditched my movie idea.  I always wanted to do something on Illuminati and Skull and Bones.  Since Drake was screwed by Military Intelligence, I thought why not have him fight the Secret Government that helped put his Physics career to an end.  It was perfect for him and me.  This way I could explore a fascination of mine, Government conspiracies. 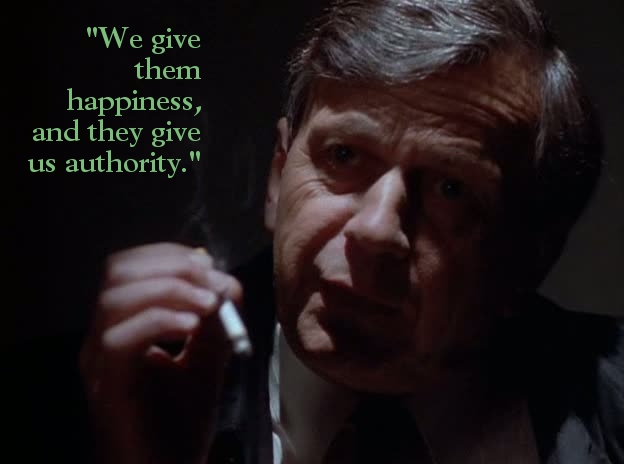 You may think Shadow is a carbon copy of the Smoking Man, but he is not.  I had this idea before I began watching the X-files.  My idea was Shadow  was more ruthless than The Smoking Man.  He came from privilege.  His father was a media mogul and had a long history in influencing Politicians and the business industry.  Although we see the Smoking Man in the first episode of the X-files, I wanted my villain to remain in the Shadows, like he is the man pulling strings.  My plan is to reveal him in the second season.  I want the suspense to last as long as possible.   Shadow knows Drake, he’s been following him since he was born.  As the series moves along, we find that there is a connection between these two, but we are not sure how they are connected.  There are few who know of this man.  One, is Father Michael, who believes that this Shadow is so ruthless and powerful that he will destroy Drake.  Father Michael will stop at nothing to keep Shadow from him, even if he has to keep Drake’s past from him.
The only information we have on Shadow is that he was educated at Yale and that he was a member of the famed Skull and Bones society.

He has a ruthless Assassin on his payroll, who he is quite close with.  He met Shadow at Yale, the two were
members of Skull and Bones.  The man’s name is apropos, Mordecai Morphine, because his weapon of choice is untraceable narcotics.  Morphine has the look of an Assassin.  He short with dark beady eyes, a receding hairline and a bushy mustache.  Morphine’s backstory is quite fascinated.  He’s an ex marine, who moved on to be a Navy Seal.  After that he was recruited for the CIA Black Ops program, where he was involved in all kinds of covert operations, that have been blotted from existence.  He has thousands of identities and many are not sure if his real name is Mordecai Murphy.  Whenever Shadow needs to keep the truth from coming out, Morphine is given a call. He is also used to extract the truth, or at least put a good scare into someone.
I cannot wait to explore these two fascinating characters and see what golden nuggets they have for me.  I will surely write more on these two.  Look for future posts about Shadow and Morphine.

Hi, my name is Peter Murray. I am a scriptwriter and I started this blog as a way of promoting my own writing, which is mostly plays, screenplays and television scripts. bMy background is unique. My father is a retired theater Professor and both my parents acted at The Barnstormers Summer Stock Theatre in Tamworth New Hampshire, which was founded by my Godfather, Francis G. Cleveland, who was the son of President Grover Cleveland. Having all that history within my family and a Godfather who started a theatre, it was natural that I became interested in theater. I attended Johnson State College in Vermont with the specific purpose of becoming an actor. However, scriptwriting took over. I have been writing plays since I was about twelve. I would see a Barnstormer production and say, I can do that. Yes I could do that, but in those early years, not so well. As time went on I became much more proficient with a good ear for dialogue, plot and character development. I have written a few plays. Two were produced in Vermont, a one act for First Night in Burlington called "KIng Stud," and another titled Crossing The Bridge. The latter was also taken to the Barnstormers and done at the professional level with my Dad directing. My other writing includes a few movie scripts. One is a trilogy I am working on called Derby Double. It's an action adventure sports series dealing with Soccer. Another script is called the Third Eye about a metaphysical detective(Currently trying to work that into a television series.) And currently I am working on a television series about my childhood, both here in New Hampshire and England, where I lived for five years. I call this series, "Letters from England." I have five episodes in the can and you can read them here. View all posts by petercmurray26