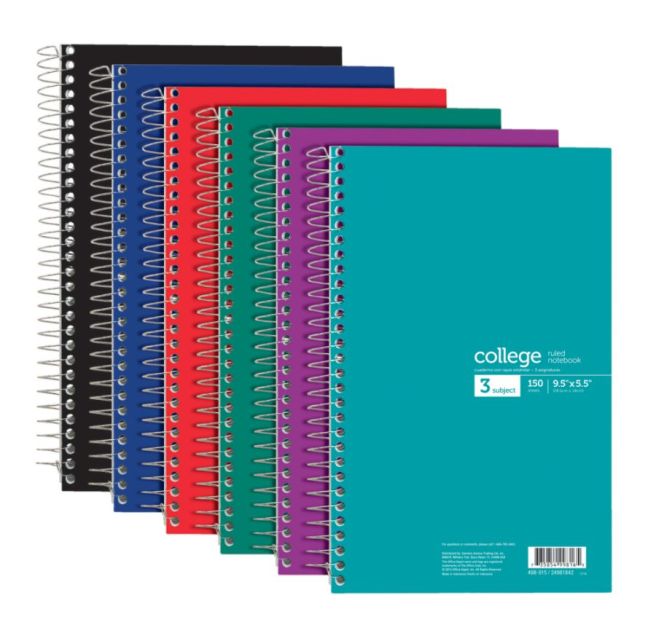 Rather than write a blog about writing, today I decided to write about something completely different.  The writers notebook. I chose this topic, because I have been embroled in Fall cleaning,  which has entailed a lot of tossing of excess stuff I no longer need.  One of them is notebooks.  I got to thinking about the notebook.  For years, I have saved my writing notebooks.  For some reason, I just couldn’t part with them.  Most of them had concepts or ideas for scripts.  A lot of them had character sketches in them, and a lot of them had very, very rough drafts for scripts filled with cross outs and notes.

Rather than throw them out, I kept them.  In this age of computer technology why would I do that?  First of all I am old school.  There is nothing more exhilarating to a writer from my era than to take that fresh page(That paper smells so good I might add.), and filling it with dialogue, or notes or characterization questions.  It feels like an accomplishment to fill that notebook up with all kinds of ideas.   Through the years, I had discovered I had accumulated so many notebooks, some writing and some not filled at all, so there was the need to purge.  One reason, I live in a smallish apartment.  I admit it, I am a bit of a pack rack.  If you had seen how many notebooks I have thrown out today, it seemed a large as the amount of books I own.  That’s a large exaggeration, but it seemed like it.  The second reason,  is that I came to the conclusion, that some of the scripts left unfinished, were simply not as interesting to me as they had been.  I realized I was never going to get to them.  I decided why keep them?  In some cases the writing was previous rough drafts of material I had written and I have further drafts in my computer.  There is something about paper and a writer.  Throwing it out, can be heartbreaking.  You remember that first time that you wrote something meaningful.

My first writing notebook was in a creative writing class.  My English teach Bob Fisher gave us these tiny blue notebooks(He called them blue books)  and he wanted us to fill them up and ask for another one.  It was exciting to me.  I couldn’t wait to use to write a short story or some sort of commentary essay and fill that puppy.  I did, many times over.  I think by the end of the term, I had written in five blue books.

My first memory of writing a script in a notebook, was the summer before my year in college.   I wrote an adolescent script called “Taking Chances” about a nerdy kid, who somehow manages to garner the attention of the most popular girl in school and it goes to his head and he messes it up, by acting like and idiot.  It was kind of an odd experience, as I would spend hours writing this in front of my best friend and then I would read him what I thought were the funny parts back.  It was if my friend Dave was writing this with me as he gave me a host of ideas.  He loved it, but after a few years I realized it was horrible, so I ditched it.  However, that script was important to me, because I needed to write it.  I had just been rejected by a girl and I had just seen Risky Business, which inspired the script.

Today was a nostalgic day.  Today was the day, I decided to enter the world of writing completely in a computer.  Today was the day, I decided that after working on an old Smith Carona typwriter, I would back my work onto a flash drive.  No more notebooks.  I loved them, but it’s time to move on.  My apartment and my cat thank me, there’s more room in my apartment now.  I also think it’s much easier, as there is no cross outs or white out blotches from the Smith Carona.  However, those days remind me of all the miles I have put into my writing.  It was time well spent and well worth it.  Two plays were produced out of it.